I really need to be better about keeping everything updated on here. Things have been so busy and I have fortunately been so busy riding that I haven’t had a chance to update this like I should be. So, let’s see if I can manage to remember everything I need to post in here.

On a sad note we unfortunately lost Chance, our kill-pen rescue to a very random and sad freak accident in May. We worked so hard to save him but in the end it was apparent that his quality of life was not going to be where it belonged and he had already been through so much in his short time here on Earth that we decided it was best to end his suffering even though it was hard for us.

We took a few horses to the Dressage In The Sandhills Show in Pinehurst over Mother’s Day weekend. Over all it was a pretty good weekend although not as wonderful as I had hoped. (Don’t we all?) Cosmo made his return to the show ring at 4th level and while he was very obedient he was not his normal jazzy self at all and just didn’t feel quite right all weekend. Which was unfortunate, but on the upside, we were able to get back in the arena which after everything we have been through these last few months was a huge accomplishment in it’s self. We came home with a clear game plan for what we needed to improve on (less magnesium, perhaps some shoes on him) and a plan moving forward. In spite of being a far cry from himself he still managed to end up with a 2nd, 5th, and 3rd which is pretty impressive considering what we were working with. He really is one of, if not the most amazing horse I have ever had the privilege to ride. I am so lucky. Joey also showed on Sunday in first level. He was FANTASTIC both test. The judge was not thrilled with his first test, which made no sense to me, I thought he was fantastic and I was delighted with him, but apparently she wanted him to go a bit differently than I did. He ended up 4th in that class, but I was very disappointed with his score. After reading her comments on the test I adjusted the way I rode him a bit for the 2nd test and she liked it much better. Unfortunately apparently at the end of the 3 days I was a bit brain dead because I totally spaced in the test and forgot my stretchy circle. Oops. But, if that hadn’t happened he would have had a 5 point score improvement from the same judge. He ended up 3rd in that class and I was just delighted with him all weekend. He is just such a good boy, all the time and is a real blast to show. He is really dependable in the show ring and seems to always rise to the occasion. Someone is going to be so lucky to have him. Ellen Bradford also showed Boomer at training level this weekend and had a really good weekend. She came home with a 4th place in some HUGE divisions and scores up to 69% with very, very little prep leading up to the show. 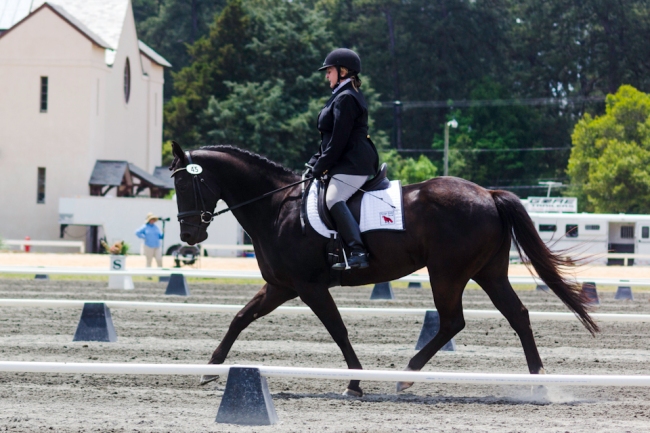 Cosmo and Briana on their way to a 2nd place finish at 4th level.)

This past weekend we took a group up to Raleigh for the Capital Dressage Classic. It was a great weekend. Hot, but certainly could have been a lot hotter. I showed Michelle Martin’s Pyper in two second level test on Friday. For those of you who are unaware, I HATE 2nd level. With a passion. It’s the pit of despair and I avoid it at all cost. Well, I’ve avoided it for so long that I have not gotten the 2 scores I needed for my bronze medal, so I decided to go on and knock those suckers out. Pyper was a really good boy even though he too thinks 2nd level is unnecessary and that changes are way more fun and we got those 2 scores (and then some) I needed and a 2nd and 3rd place finish. Not bat at all. Michelle showed him the rest of the weekend at 3rd level. She only had 1 or 2 rides on him before the show because of an injury (to her) and you would have never known by how she rode. She got her final score for her bronze medal in her first class and finished 2nd on her birthday no less and came back to win her 2nd class on Saturday. She was 2nd in her first class on Sunday and we decided to scratch him from the 2nd class. He was incredibly tired and we had accomplished everything we set out to accomplish so it didn’t make sense to pound on him. Ellen and Boomer had another solid weekend. They ended up with 2 fifths, 2 thirds, and 2 fourths. Lysa Hodgson came up to the show with us for the weekend and what started out as a rough show when Bogey got a bit worked up in the warm ups on Friday resulting in her scratching both of those tests ended on a fantastic note. They came home with a 6th and 2nd on Saturday and on Sunday they were 2nd in their first class and won their last class of the day. Talk about a come back! Emily Grace Swinson was hands down the busiest 9 year old at the show. She had both of her ponies there and was a total rockstar, like usual. She is such an awesome little rider and is hands down going to be one to watch for the future. She came home with 5 2nd’s on Ruffles (who’s name we will be changing to “Always a Bridesmaid” haha) and a first, a third and 2 fifths on Missy. Over all this was a great weekend and it was a blast with an incredibly fun group of people. This is what showing is all about. Nothing like a supportive group of friends showing together, having fun and cheering each other on to remind you why we put in all this hard work day after day!

(Michelle and Pyper on their way to winning their 3rd level class!) 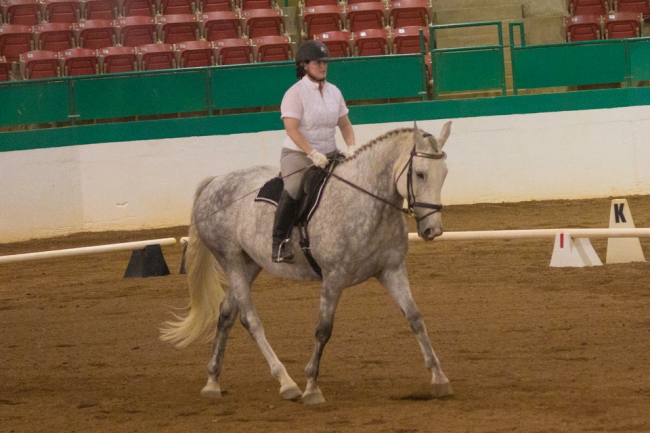 On the home front things have been going pretty well. Busier than ever but that’s never a bad thing. MiMi is going so well under saddle. She is just such a smart and fun little girl. Her future is so bright, I can’t wait to see how it unfolds. She is starting to canter under saddle now and going so well. I love her to pieces. We got a new horse. She is a 16.1H, 6 year old, OTTB who is so gorgeous and a fantastic jumper. She is still a green bean but has a bright future ahead of her as an eventer and is going to be one to watch. Hopefully she will be Farrin’s next upper level horse. We also have a new sales horse here at the farm. His name is Leggs, or Landshark and he is a really nice youngster. He is only 4 years old and still trying to figure out where his body and legs are underneath him but he is going to be unstoppable in the future, that’s for dang sure. I really like him. (I so wish I could keep them all in my barn. Would make me so incredibly happy, I swear I need about 3 more of me so I can hoard them all :-P). Everyone else is going really well too. Have had some wonderful rides on Cosmo and we are heading to Raleigh next week to ride in a clinic with Kathy Rowse. She is really fantastic and I always come back with lots of wonderful information to pass on to everyone after I work with her. On Saturday we will take a few horses out to CHP for the schooling day. Probably a handful of the youngsters will go and hang out. MiMi might go just walk around. It will be her first trip off the farm. Landshark will go for a short show jumping and cross country school, Misty needs to go jump a quick course before she does the novice horse trail there on Sunday. It will be her first time out since Williamston the first of April, and Anya will probably come for a small XC school as well. Will be a busy busy day for all the youngsters (And Misty). The following weekend is going to be busy as well. It is the Rise ‘N Shine Dressage show here in Pinehurst. Cosmo is going to go over for a school on Friday and Lysa is showing on Saturday and Sunday. There is also a symposium with Susann Von Dietz that NCDCTA is putting on at North Star Training Center in Chapel Hill. Ellen is lucky enough to be a demo rider on Saturday so we will be going back and forth a bit next weekend trying to be at everything at once. 🙂 The girls are either out of school now or almost out which means that any day now the farm will be abuzz with teenage girl chatter. YAY! I love having all my girls here over the summer. We have a blast together, I get so much done, and they learn a ton. Stay tuned for lots and lots of updates on everyone. We are going to be wide open in full force this summer. It is going to be busy and fantastic that is for sure. It looks like I am going to have roughly 12 horses in training, and students on top of that. It will be busy busy busy so stay tuned! 🙂 <3Bri

Anya, the newest princess and Farrin

Mimi working under saddle with Briana like she has been doing it all her life.