Well- I guess I did slightly better this time. I only waited 4 months to update instead of 5. Oops.

Picking up where we left off in July we headed back to Pinehurst for Rise ‘N Shine Dressage at the end of July. Michelle rode Veronica at 1st level and Jen rode Eliza at Intro. It was probably the quietest show we had all year which was nice. Both were great all weekend with Jen winning her classes again and Michelle placing 3rd.

In August we took a big group up to Raleigh for the NCDCTA Labor of Love I&II Show. I debuted a new freestyle with Popstarr at I1 and it was a huge success scoring over a 71%. Collier Wimmer of Three Wishes Freestyles has truly outdone herself again. I also showed Zidane at 3rd level on Sunday and he not only won his class but was 3rd level high score. So far Z and I are undefeated together. Jordyn showed him on Saturday at 3rd level and also won her class. She also showed Second Chance at Intro for Elena Freeman and put in 2 solid rides for 2nd and 4th place and more importantly gave Chance a solid confidence boosting first experience that he needed. Michelle Martin had another good weekend with Veronica placing 4th and 5th in large AA 1st level divisions. And rounding out the crew this weekend was Jen and Eliza who were 2nd both days in their intro classes. This was a huge improvement from last year at this show where I didn’t get to ride because I was injured and we spend all of Friday night hanging out in the ER when Michelle had an unplanned dismount in schooling.

September had us showing back to back weekends here in Pinehurst again. Finishing up the Swat and Sweat Series first where Jen was series Intro AA Champion, Intro High Score winner and first and second in her classes. Natalie knocked the cobwebs off after a couple months out of the show ring and starting her first semester of college placing 2nd, 3rd (x2) and 5th at second level with Cameron. I stepped in to show Lysa Hodgson’s The Usual Suspect at first level because Lysa is sidelined with a small injury. We won our 1st level class and we’re high score of the day at first level as well. Then the next weekend we were right back at Pinehurst Fall Dressage. Natalie and I had a clean sweep with Pop and I at I1 and her and Cameron at 2nd level winning all of our 7 combined classes. Popstarr was also Open FEI High Score and on Sunday scored a whopping 73.375% in our I1 MFS. Leslie Slabaugh and her Mellowdramatic also had another good weekend and checked off another score towards her bronze medal.

October came in with rain and went out with even more rain. We were supposed to go to the NCDCTA Harvest Moon Championships early in the month but a little hurricane named Cailyn decided to change those plans and reschedule it for October 25-26. Luckily the new weekend greeted us with absolutely gorgeous weather. We brought 7 horses with 5 of them showing in their respective championships. Popstarr was yet again his wonderful and amazing self and we won both I1 Championship classes and the division. He has more heart and try in one hoof than most horses have in their entire bodies. There really aren’t enough words in the dictionary to cover what he means to me. Brandon came too and was also his usual awesome self. He hasn’t shown much this year (this is only his 2nd show all year) because we have been focusing more on training. I am very lucky with him that he is such a superstar at shows that I don’t feel like I need to keep him in the ring much while we are working behind the scenes at home. I also showed Lysa’s Bogey in the Open 1st level Championships. He consistently scored a 66 and change in all 3 of his classes, placing 3rd/4th/5th in huge open divisions and was 3rd in the championship. What a super star. Natalie and Cameron were rock stars again at 2nd level winning 2 of her classes, and placing 2nd and 3rd in the other 2 and finishing 3rd in the championships. I am so proud of these 2 and how far they have come in their first year showing together and at 2nd level. The confidence they have in the show ring now compared to the start of the year is incredible. Jordyn and Zidane were 2nd in both of her 3rd level classes as well as 2nd in her championships. It’s been a pretty impressive year at 3rd level for these 2 and I can’t wait to see what comes next year as they prepare to enter the FEI ring. She also showed Elena Freeman’s lovely new mare, Gevalia Bay at her first show easily winning both of her training level classes. And last but most certainly not least is Jen and Eliza. Jen finished her incredible year at Intro with Eliza winning one of her classes, placing 2nd in 2 and 3rd in one and a very close 3rd place in her championships. 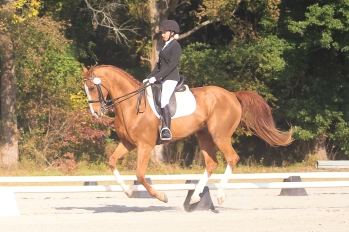 Then, on halloween we shifted gears slightly and went to a schooling show. Jen debuted on her awesome new partner, Poetry In Motion in an intro B test scoring over 67% and 2nd place with only a handful of rides together and my daughter Hailey made her adorable dressage debut on her pony, Daisy Duke riding Intro A at a whopping 6 years old with no test reader or assistance in her test scoring a 62.81 and placing 2nd. Hailey is proving to be my child through and through and has already set her goals quite high for 2016 and I couldn’t be more excited to watch her go after them.

That wraps up our show season for 2015. We took a few weeks to let the horses rest some (and us too) and we are already back at it training hard and hoping for a kind winter so we can get lots of training in and come out yet again with a bang in 2016. xoxoBri